CMG Appoints New Members to its Board of Advisors 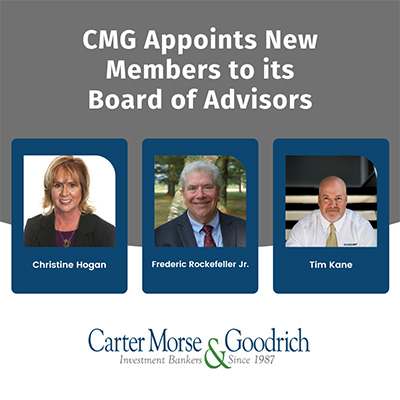 Carter Morse & Goodrich ("CMG") is pleased to announce the appointment of Christine Hogan, Fred Rockefeller and Tim Kane to our Board of Advisors. They join a diverse group of highly successful business people in our community who have been committed to supporting our mission since the creation of the Board in 2009.

Frank Morse commented: “We have developed deep personal relationships with Fred, Chris and Tim following the completion of successful transactions on their behalf, and we look forward to their continued friendship and support.”

Christine has most recently been President of Consumers Petroleum/Wheels of CT (“Wheels”), a local chain of convenience/ gas locations and wholesale distribution of petroleum products primarily in Fairfield and New Haven County. In 1987, she was hired as general ledger accountant for the company and from there she has held a variety of roles including finance, operations, sales, and marketing.

Wheels was recently purchased by Global Partners, LP (NYSE: GLP) and CMG had the honor of working with Christine and her team on this successful transaction. The transaction includes 26 company-operated “Wheels” branded convenience stores in Connecticut, as well as fuel supply agreements with 22 sites in Connecticut and New York. As part of a Federal Trade Commission consent order, Global divested seven select retail sites in Connecticut.

Christine has chaired several industry related councils such as, CEMA (Connecticut Energy Marketers Association) and the Citgo Marketers Council. She also served on the board of Directors for the National Association of Convenience Stores.

Consumers and Wheels are very active with the Muscular Dystrophy Association and raise money through annual events such as their Shamrock drive and charity golf outings.

Christine received her Bachelor of Science in Accounting from Sacred Heart University in Fairfield, Connecticut. She is an avid golfer and enjoys cooking. Christine and her husband Tony have two sons.

Fred is CEO and Chairman of Rhode Island-based Cranston Print Works Company (CPW), a 200+ year old miniconglomerate founded in the textile printing business. Joining CPW in 1985, Fred participated in the Company’s leveraged buyout of family members into its ESOP in 1987 and subsequently took on the role of running CPW’s textile division dedicated to its Wal-Mart business, earning Wal-Mart’s Vendor of the Year designation in 1997. Subsequent responsibilities included overseeing the consolidated textile group’s supply chain operations, including frequent trips to China procuring greige goods beginning in 1987, and responsibility for the sales and customer service functions. In 2006 Fred returned to the CPW corporate headquarters to take on the CFO role during which time he managed through continued contraction of the textile business, closing its remaining textile printing operation, and expansion of CPW’s chemical business. The financial crisis of 2008 saw the Company’s defined benefit plan implode, which he managed by freezing the plan and obtaining waivers for minimum funding contributions. Named CEO in 2010 and Chairman in 2014, Fred has implemented a strategy of divestitures to settle legacy obligations and enhance value for ESOP shareholders. With CMG as advisor since 2007, Fred successfully sold the Bercen Chemical business (and CPW’s underfunded defined benefit plan) in 2019 and the transportation business, Cranston Trucking, in 2021. He currently expects to divest the remaining textile operations or otherwise reorganize CPW in order to maximize and realize the value of the ESOP shareholders in the near-term.

In addition to Fred’s roles with CPW he has served on the board of family-owned Indian Spring Land Company of Greenwich, CT, and currently serves as Board President of the Corliss Institute, a boutique non-profit agency servicing adults with myriad developmental disabilities focusing on those who are also deaf. He lives in Barrington, RI, where he and his wife of 44 years raised three daughters. He frequently travels to his family’s compound near Saranac Lake in NY’s Adirondack mountains, where he enjoys canoeing, hiking, fly-fishing, and birding.

Before joining Goodway Technologies, Tim owned and successfully exited several small to medium-sized businesses, many built around technology invented and patented by himself.

Fresh from university, he was hired by Merrill Lynch (Real Estate & Relocation Division) in Norwalk, CT where he helped create successful radon testing and remediation practices for homes purchased by Merrill Lynch during the corporate relocation process. During this tenure, he formed an idea to start a new company focused on environmental remediation services for homes involved in a real estate transaction.

Forever the entrepreneurial adventurer, in 1998, Tim launched Radon & Water Control Systems (RWCS). Over the next five years, the company grew from a local provider to offering radon services nationwide. In 1992 a second company (BGC Technologies) was created to handle new product innovations for the environmental contractor market. In 1995, Kane received the first of many patents to invent a residential water treatment system designed to remove radon from well water. Tim holds over fifteen US and global patents and counting!

Tim earned his BS in Economics at the University of Maine and currently resides in Greenwich, CT, and Charlestown, RI. He and his wife have three grown sons. Tim is an avid outdoorsman, either engaged or planning his next fishing, hunting, or other outdoor trips. In 1985 Tim pursued a long-time dream of working in the Bering Sea. The adventure began with a 6000-mile two-week drive to Kodiak Island, Alaska, where he landed a job on a small fishing boat, experiencing first hand the hard work and just rewards of life on the Bering Sea. His subsequent experience exploring the Aleutian Islands and Prince William Sound while chasing the summer salmon migration helped shape many of Tim's future interests and pursuits.

Tim serves on various boards. He is Chairman of the Board for Goodway Technologies, is a trustee at the Sea Research Foundation, and ECF Foundation while also quietly working with numerous other charities.