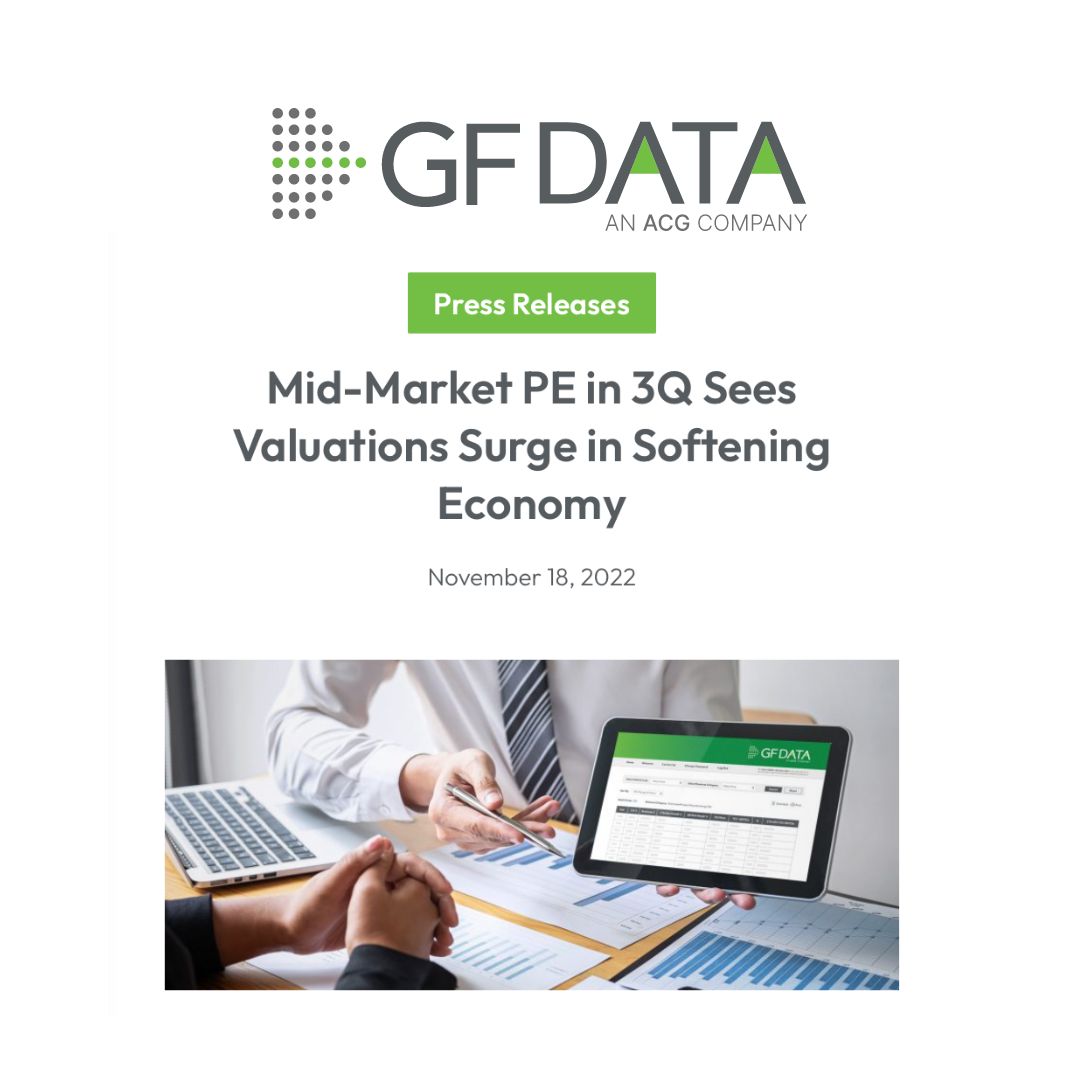 ‍“Risk Off” is the name of the game for mid-market private equity professionals, according to GF Data’s November report. The third quarter saw a marked surge in valuations accompanied by substantial increases in equity contributions and cost of capital due to a slowing economy and successive interest-rate increases.

GF Data’s 266 active private equity contributors reported on 66 transactions in the third quarter meeting our parameters—Total Enterprise Value (TEV) $10-250 million and TEV/Trailing Twelve Months (TTM) Adjusted EBITDA 3-18x.  Completed volume was about 28% off the 78 deals closed in the year-ago third quarter.
Valuations on deals completed in the third quarter averaged 8.1x Trailing Twelve Months (TTM) Adjusted EBITDA. When looking only at the buyout cohort year-over-year, GF Data found valuations rose to 7.5x in 2022 year to date, against 7.4x for all of 2021.

“While the spike is directionally correct, we believe it is overstated,” said GF Data Founder Andrew T. Greenberg. “The random fall of highly valued deals by quarter and a preponderance of non-buyout transactions—such as growth capital investments and recapitalizations—completed at lofty  multiples in the period pushed up the average. Over the balance of the year, we expect the market to be characterized less by a small cohort of highly valued deals and more by sellers absorbing the effects of more challenging economic and capital market conditions.”

Average equity contributions surged across the entire data set – to 51.4 percent in the first nine months of the year versus an average of 48.2 percent for all of 2021—while the average for platform buyout transactions jumped 2.5 percentage points, to 57 percent versus 54.5 percent. Initial pricing on senior debt averaged 6.5 percent in the third quarter, up nearly 200 basis points from the first half of the year. Mezzanine pricing has so far resisted a similar move.

In spite of this, GF Data’s report found average debt loads essentially unchanged. “We hear the reports of a risk-off market for cash flow-based leveraged finance,” said Bob Dunn, GF Data’s Managing Director. “But through the summer quarter, this was not yet reflected in the numbers.”

“We are seeing a decline in both valuations and leverage for those companies considered cyclical and vulnerable during an economic downturn,” said Michael Carter, managing partner of Carter, Morse & Goodrich. “On the supply side, we expect transactions to shift from private equity sellers to founder-led and family-held companies that are more driven by personal and strategic objectives rather than valuations.”